Sanctum 2, sequel to the tower defense FPS, coming in 2013 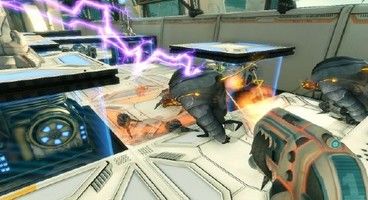 Coffee Stain Studios has announced that a sequel to their surprise indie hit Sanctum will be coming to PC, Xbox Live Arcade and PlayStation Network in 2013.

Sanctum was a hybrid of first person shooter and tower defense released solely for PC and managed to sell 300K units on Steam. The game earned a 70 Metacritic score; general consensus was that while the game was fun and unique, it was light on content.

"Sanctum has been a huge success on Steam for Coffee Stain Studios, and bringing the next version to console players as well as the PC market is a great next step to share this unique experience. We all have logged quite a few hours with Sanctum and can definitively say that what Coffee Stain has in store for Sanctum 2 will blow the minds of Sanctum fans and new gamers alike," announced Reverb Publishing exec Ted Lange, which seems to indicate that the sequel will be meatier than its predecessor.

Sanctum is currently available for $3.99 USD on Steam.