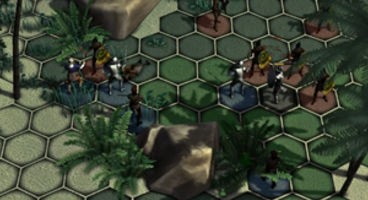 We take the role of a Spanish Conquistador exploring South America with missions based off "actual topological maps" of the region. Logic tease "intimate and detailed" combat.

The team are working on an "intricately branching" narrative and aside from the tactical role-play we also get some "touch of strategic resource management and a pinch of choose-your-own-adventure."

It seems tragic for such a project to be just shy a few thousand more of reaching their goal after a month of enticing pledges on Kickstarter. The Logic Artists studio also promise that it would reach Mac and Linux if funded as they've "already built and tested it, it works fine". It will also be entirely DRM free.

Expeditions: Conquistador is a tactical roleplaying game with a touch of strategic resource management and a pinch of choose-your-own-adventure. Conquistador is set in a rarely visited part of history which is rife with mystery, political intrigue, and good old-fashioned violence.

You will take on the role of a Spanish Conquistador in Central America in 1518-1520. Select the members of your expedition and explore campaign maps based on the actual topological maps of Hispaniola and Mexico. Through intricately branching dialogue, you will engage with the characters and situations that you encounter across these uncharted areas, and when it’s time to spill blood, a tactical combat system of great depth and brutality will let you control your individual troops in battle.

Combat is intimate and detailed, and failure has great consequences. Every expedition member has a face, a past, a set of personality traits, and of course a combat role - their morale will change depending on your decisions, they will chime in when you're weighing your options, and if they fall in battle, their injuries will carry over to the world map, where they must be treated by your doctors until they're back on their feet. Should you fail to treat your expedition members, they will die and be gone for good.

Choice and consequence is central to the play experience of Conquistador. As the leader of the expedition, you will face difficult decisions about the use of your troops and your resources, as well as how to engage with the factions of the savage New World. Will you defy history and be a diplomatic envoy of peace? Or will you be a ruthless conqueror determined to lay all of the Aztec Empire at your feet?

• A gallery of unique expedition members who chime in during events & conversations and react to your decisions - pay attention to their morale or you may have to deal with mutiny!

• Random events that throw you into danger, present unexpected opportunities, and build relationships with the members of your expedition.

• High replayability - dynamic endings reflect decisions you've made throughout the story, how much gold you bring with you back to Spain, and how many expedition members you've lost (or gained!) along the way.

• Character management - unlock special abilities by promoting your expedition members, assign equipment to your troops, and treat injured or sick characters with a triage system.

• Campaign maps based on actual topological maps of the Dominican Republic and Mexico.

The indie team have released a gameplay trailer below. Check out the Expeditions: Conquistador Kickstarter.