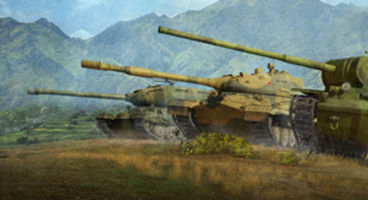 Wargaming.net introduces "substitutions and additions" to the roster of Soviet heavy tanks in World of Tanks with the latest update, 7.3. The tech tree is redesigned with a new split branch.

T-150 is a newcomer to the MMO and a new battle arena is added; South Coast. There's also Dragon's Ridge, the first map in Asia. 7.3 gives a "taste for big and powerful heavies."

World of Tanks is a team-based MMO where players get to smash around in armoured behemoths. The update moves a few things around in the tiers of tanks for the Soviets.

"These new machines should give players a taste for big and powerful heavies," said World of Tanks' Mike Jivets. "With the help of the upcoming battle arenas, the game will get a fresh look from both a visual and tactical point of view."

Here is the summary of update 7.3:

Update 7.3 brings substitutions and additions to the line of Soviet heavy tanks, splitting the line into two branches. Leading the way through the redesigned tech tree, the update moves the IS-4 tank into tier 10 of its own heavyweight line with KV-4 and ST-I. The KV-3 has moved from tier 6 to tier 7, and freed the slot for another newcomer, T-150.

New gameplay elements introduced in the 7.3 include the addition of a new battle arena, the South Coast, and the first map set in Asia, the Dragon's Ridge.

Visit the official World of Tanks website for the full 7.3 changelog.