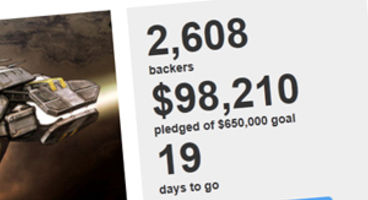 The HD Interactive and Most Wanted Entertainment team behind Nexus 2: The Gods Awaken has added a new $150 reward tier to their Kickstarter campaign, which they bill as a 'Digital Special Edition'.

There are 19 days left for the Nexus 2 campaign to raise just over $550k for it to be considered successful and the pledges from backers to be paid to the studio.

Understandably those eager to see a return of Nexus are anxious for the developer to put out more community updates to whip up a frenzy of interest. The Nexus 2 team has confirmed that PC is their primary focus and that their space tactical feast for the eyes will be DRM free, although a Steam release would have Steamworks for example.

There are just over 2,600 backers pledging just over $98k as of press time. Funds keep trickling in but Nexus 2: The Gods Awaken is going to need something to drive up the campaign's momentum. Be sure to check out it out.