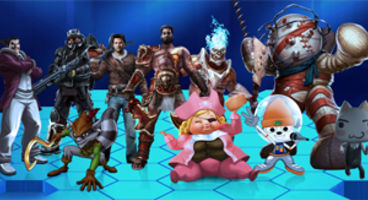 Also set to make a cyborg appearance is Metal Gear Rising's Raiden. The pre-order images that leaked the info have been pulled by Sony. Silhouettes on a poster match Tekken stars?

A NeoGAF user reckons the shadowy figures on a poster at the main site tease Tekken's Kazuya and Jin, as well as Ninja Gaiden's Ryu Hayabusa. Fans spotted Ratchet & Clank back in July.

There are leaks a plenty from the PlayStation All-Stars Battle Royale marketing campaign which isn't that surprising given how many video game stars are involved in the project. Check out the official website for yourself and maybe you'll catch a PR leak. PlayStation All-Stars Battle Royale releases on PS3 and Vita October 23rd in the US, 24th in EU.