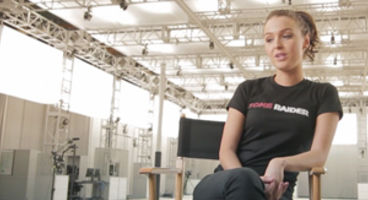 Lara Croft actress Camilla Luddington has revealed in a behind-the-scenes documentary, starring actor and gamer Zachary Levi, that playing Lady Croft is no stroll in the park.

There's a lot more crying involved than she thought, for one. Luddington believed she'd just be "kicking butt," as we're used to seeing Lara as "cold-hearted, almost a killer."

The actress notes the virtual Lara is an icon in gaming realms, as well as something of a sex symbol. Despite losing her trademark shorts, Luddington assures us Lara is as sexy as ever.

"When I got this role I never thought I would cry so much. I just thought I'd be kicking butt. That's the Lara I thought I'd gotten myself into," admitted the UK born actress. Her role as Lara in the all-new Tomb Raider has been "some of the most emotionally and physically draining work that I've ever done."

"Obviously she's a video game icon. But she's also a sex symbol. She fights for what she believes in. She's courageous. I think that's sexy," she continued. "The shorts are gone, which I'm sure most guys will think is a bummer. I like her new look. She's still gorgeous, but now she's a person."

The part where Lara is forced to make her very first human kill was "probably one of the hardest things" Luddington has had to film. "She has to fight for her life," she added.

"It's fascinating how she reacts to that. She doesn't just walk away from that first kill."

You can check out the first episode of The Final Hours, in which TV/film actor Zachary Levi presents a behind-the-scenes documentary on Crystal Dynamics' Tomb Raider which releases on Xbox 360, PS3 and PC March 5th, 2013.