NetherRealm offer "deep, elaborate story" in Injustice, "ton of stuff to draw from" 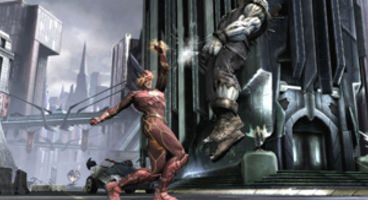 Ed Boon of NetherRealm, and creator of Mortal Kombat, reveals in an interview that the upcoming Injustice starring DC Comics notables isn't just a free-for-all mash-up of heroes.

It'll have a "deep, elaborate" campaign to experience, teased Boon, who said Mortal Kombat's story mode "just worked" and it "ended up surprising people" in a good way.

The studio is going for a "NetherRealms spin" on these characters and are sparing anyone, as even Superman is looking a lot less Boy Scout. Fans will "definitely be surprised by this rendition".

"With every game we do, there are things that worked and things that didn’t," Ed Boon told US PlayStation.Blog.

"In Mortal Kombat, the Story mode just worked. We didn’t promote the story leading into launch and it ended up surprising people. So we want to continue that tradition and offer a deep, elaborate story experience in Injustice. And with these characters, who have decades of history behind them, there’s a ton of stuff to draw from."

"We can’t wait for people to see the Story mode in this game."

We also get even more from what stages we choose to fight in as the level of interaction gets kicked up.

"We wanted to shake up the fighting game formula in terms of the environment and how you use it. Different characters use the environment in different ways; that will really affect your strategy when facing certain characters on certain backgrounds. Power characters can pick up a car and throw it, while the more agile Gadget characters might use the car as a springboard," Boon continued. There's also the fact that props can now be used in combos.

"The stage select will be something you care about now, instead of just mashing the X button."

"When your opponent gets good at using a particular part of the stage, you’ll learn to avoid it – or go towards it – and that dynamic will hopefully shake up the formula."