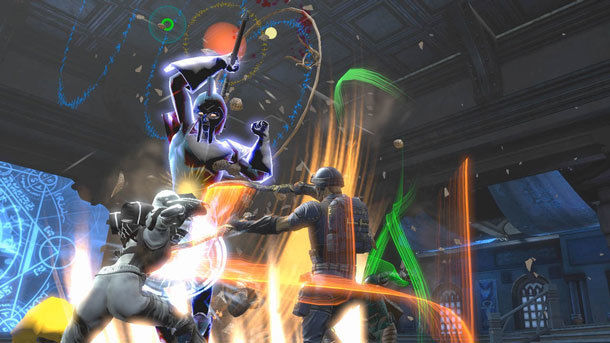 * New Legends Characters - Hand of Fate will introduce the first arcane characters to Legends PvP. The Lord of Order, Doctor Fate and the treacherous sorcerer Felix Faust make their playable debut in Legends PvP as magic-wielding hand-blasters who conjure powerful spells and summon allies to their aid.

* Operations - Six intense new episodes designed for group play -- three Heroic and three Villainous -- will be unleashed upon players under the direction of Doctor Fate and Felix Faust. Heroes will be called to help the Lords of Order protect innocent souls from the forces of darkness. Villains must complete perilous missions for Felix Faust to reap his rewards.

* Side Missions - As players battle through the six Operations, numerous side missions will arise that take players all over Metropolis, Gotham City, and beyond, pitting them against previous adversaries and new dangers that have arisen.

The Hand of Fate DLC will be free for Legendary level subscribers and for purchase for Free and Premium players via DCUniverseOnline.com, PlayStation Network, and the in-game Store.