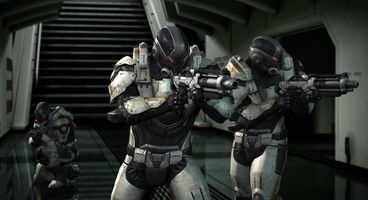 As many expected would happen, BioWare community coordinator Chris Priestly confirmed that the PC version of Mass Effect 3 will require Origin for authorisation, and will not be released on Steam.

The chief reason the game will not appear on Steam is due to Valve's policies regarding downloadable content. Valve requires that all DLC be purchased through Steam, and may not be purchased in-game.

"During initial release Mass Effect 3 will be available on Origin and a number of other 3rd party digital retailers, but not on Steam at this time. Steam has adopted a set of restrictive terms of service which limit how developers interact with customers to deliver patches and other downloadable content. We are intent on providing Mass Effect to players with the best possible experience no matter where they purchase or play their game, and are happy to partner with any download service that does not restrict our ability to connect directly with our consumers," Priestly wrote in a Q&A on the official forums.

Priestly also stated that Origin would be required to authorize the game for both digital and physical retail copies, "Origin is required for the PC versions of Mass Effect 3, both physical and digital. Mass Effect 3 will require a one time, single authorization for the single player game. There is no limit to the number of installs. Playing Mass Effect 3 Multiplayer will require a constant connection."

Of course, he also reassured gamers that Origin is not spyware, and that the file checking is by Windows, not the game.

"Origin is not spyware, and does not use or install spyware on user's machines. In order to allow Origin to install games and their patches for everyone to use, Origin implements a permission change that results in Windows, not Origin, reviewing the filenames in the ProgramData/Origin folder. This is an ordinary Windows function, not an information-gathering process." said Priestly.