Elizabeth 'no liability' in BioShock Infinite, "she can take care of herself" 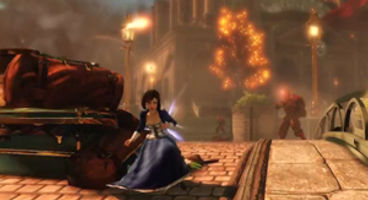 In a chat with Irrational's level designer Shaun Elliott for BioShock Infinite, we're told that AI buddy Elizabeth won't be the cause of trips to the 'game over' screen. She's one tough cookie.

It was the "first rule" for the team that Elizabeth never created a 'fail state' for the player "because her health bar dipped" or something, and that she's "not always jumping in your face" either.

Their approach was to have her be proactive, not some damsel in distress. She becomes a huge part of us gaining an advantage in combat, should we choose.

"We knew we could not predicate player failure on her state," explained Shaun Elliott in our interview. "The first rule was you were never going to die, you're never going to see the game over screen because her health bar dipped below something. Not even in special circumstances. It just doesn't happen."

"She can take care of herself, and she's there when you need her, but she's not always jumping in your face and screaming that your game is about to be restarted because you chose not to help her. That was the first big step."

They wanted us to bond with Elizabeth and feel that we choose to keep her around because she's actually useful to us, and not some whiny nuisance buzzing around.

"...she'll give you money and things that she finds in the world and she'll point out enemies, but again you can ignore her if you want. And then the tears are the ultimate expression of her usefulness. The deeper you get into the game the more tear options you start to see, often at a single time, but the opportunity cost stacks up because she can bring in as many as she wants but she can only bring in one at a time so you're faced with a choice."

"So it's really about associating her with being able to do all these things. Creating these big benefits during battles is another way to say she's not a health bar that needs defending, she's a set of super powers for you."

Irrational also felt Booker, the player character, needed to be voiced this time around so as to help us bridge a connection with Elizabeth. "It's essential that Booker is a character and can interact with Elizabeth so he doesn't just stare at her as she undergoes all these big changes; the drama of her life having broken out of prison and trying to make sense of the world she's been living in her entire life but never really touched," noted lead designer Elliott.

"So it gives us this chance to help that seem more human, but it also helps us build up the mystery of who Booker is. You know he's there to clear a debt but you don't know what that debt is when you start playing."

"People start recognising him and we're able to do some interesting things with having him be an embodied character that people know instead of just some strange visitor."

Check out our full interview with Shaun Elliott as we discuss the new Irrational heights in BioShock Infinite.