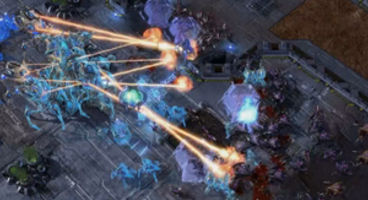 Blizzard is introducing a sparring dojo for StarCraft 2 fans looking to get into the competitive arena of ranked matches, as they understand a lot "do feel intimidated" by the multiplayer beast within.

Heart of the Swarm comes with a "training area" where our AI opponent will be telling us what kind of things we should be doing. A lot "never make the transition" from solo to online.

The StarCraft universe enjoys one of the most fiercely competitive eSports leagues, which unfortunately scares off those who otherwise might have tried a little multiplayer.

"We want to make the game more accessible to players that aren't necessarily ready to jump into a highly competitive scene," said Blizzard's Mike Morhaime. "A lot of people do feel intimidated, at least at first, in playing in ranked play."

"Unranked matches are a big step in that direction. But, even before that, a lot of players never make the transition from the campaign to matchmaking - to playing against people they don't know."

"There's a really nice feature we're adding in Heart of the Swarm which is a training area where you can basically play against the computer and the computer gives you tips on what you should be doing. It gradually gets harder. When you have completed the training program, you get unranked matched against the AI."

This isn't some super computer who'll probe your weaknesses for you and then blab what you should do to correct mistakes. It's more about highlighting the differences between campaign and multiplayer tactics and techs.

"It scripts out some basic builds for you so you know, you're not building, willy nilly," explained the CEO. "It gives you more of a safe build to start with. It's there to make people more familiar with the tech tree - because there are differences between the tech tree in campaign and multiplayer." The eSports movement is on the rise.

"We initially designed StarCraft II to be a lot of things, but one of the things we spent a lot of time focusing on was StarCraft 2 as an eSport. As something that was entertaining to view. I'm very happy with where that is… but we're at the beginning of achieving the potential in reaching a larger audience."

Check out the full interview between mike Morhaime and PCGamesN for more on StarCraft 2 eSports.