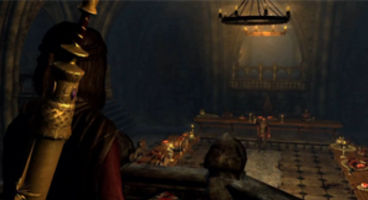 The recent Dawnguard DLC for The Elder Scrolls V: Skyrim had a streak of nudism after some NPCs got a little forgetful in donning their garments. Bethesda would like to remind them.

It's down to a "version mismatch" and were working with Microsoft to fix it. Well apparently the birthday-suit enthusiasts have now been thoroughly scolded with a 31MB update.

"With the French, German, Italian, and Spanish versions of Dawnguard on Xbox 360, we are aware that players are seeing NPCs with missing armor," confirmed Bethesda.

"This is due to a version mismatch with the title update for those languages and we’re working with Microsoft to resolve it." Obviously the blame lies with those sneaky and more powerful vampires in Dawnguard. The English version of the DLC is said to have been left unaffected by this bout of nakedness.

The Dawnguard DLC is available only for Xbox 360 right now, but PC and PS3 get it later this year.