19 March 2012 | By Jonah A. Falcon
Paradox Interactive has announced that a demo is now available for the PC version of their tower defence game Defenders of Ardania, which was released last week on the 14th March. The demo weights in at 1.7GB and is available from the official site or directly from Steam.

The game has also been released on Xbox Live Arcade for 1200 Microsoft Points ($14.99 USD). The demo and full game are available here. The XBLA version earned a 6.0/10 score from Strategy Informer in its review. 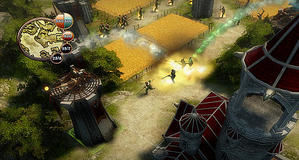