Fable Heroes may be the first of many Fable spinoffs

20 March 2012 | By Jonah A. Falcon
Fable Heroes may be the first of many spinoffs from Microsoft's roleplaying game series, according to Lionhead Studios designer Ted Timmins.

The game sprung from the studio's "Creative Day" where the prototype was singled out by then-studio head Peter Molyneux. The 20-man team working on it is relatively small, roughly a sixth of the size of the normal Fable development team.

"They really loved it and put us into development for three months. It's great! It's a first for Lionhead and we've never and opportunity where people have said go away for three months and make a game." said Timmins.

After three months, Lionhead was so pleased with the title, they gave them another five months to work on it. "The whole of Lionhead's been really supportive, and it's not very often you get to be lead designer on a Fable game. To go from a creative day project to a 4-player XBLA game... it's been quite a turnaround," beamed Timmins.

Fable Heroes did evolve during its development cycle. One of the weaknesses of the game was character design. The players were generic heroes, but one day, the team dressed the characters up as Fable puppets, and the decision clicked.

The other way that Fable Heroes differed from previous "Creative Day" projects was that it was the first to actually become its own game; other projects were merely incorporated into the main Fable games. "There has been stuff that's come out of Creative Day before, ideas that went into Fable games, but never something like a full game. Hopefully if this is a success then Lionhead will do this more often," Timmins stated.

As for Lionhead Studios seemingly being locked into making Fable games, it doesn't seem to bother Timmins. "We're all massive Fable fans, everyone that works at Lionhead, we've lived and breathed it for the last 10 years," he pronounced, "To keep expanding it is something that everyone there wants to do."

is one of two projects currently being worked on by Lionhead Studios. The other is the Kinect-powered Fable: The Journey. 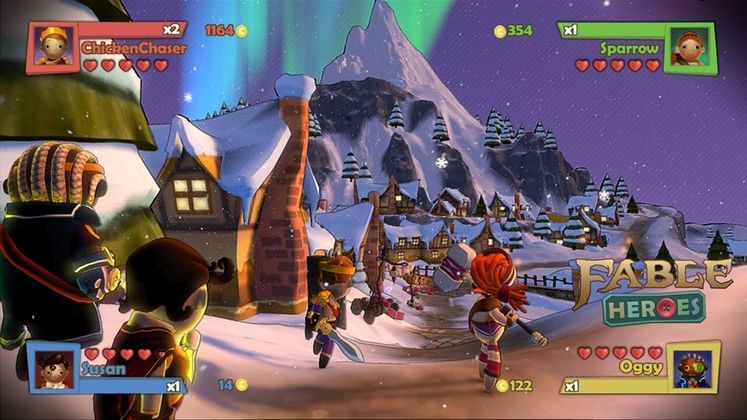