Epic Mickey 2: The Power of Two confirmed by Spector 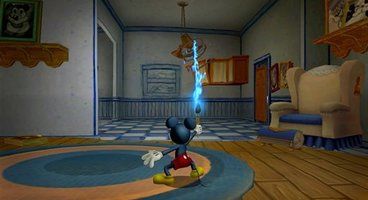 Warren Spector has confirmed one of the worst kept secrets in the videogame industry in an interview with the Associated Press: Epic Mickey 2: The Power of Two is currently in development for PlayStation 3, Xbox 360 and Wii.

The biggest change in the game is that it will be a musical, with characters breaking into Disney-esque musical numbers. Jim Dooley and Mike Himelstein, the composer and lyricist who have been working on the upcoming animated musical film Dorothy of Oz, will be making original music and songs for the game.

"I'm such a geek about musicals," Spector pronounced, "I love the co-op and next-gen stuff, but for me, when a character breaks into song, which they do on a regular basis in this game, it's magic."

The game will feature drop-in, drop-out co-op, with the second player taking control of Oswald the Lucky Rabbit. While Mickey retains his magic paintbrush, Oswald is armed with a remote control that can manipulate electricity. "If you're playing as a single player, Oswald will be there every second of the game. He's not just a multiplayer character. He's a helper, whether you're playing alone or with a friend or family member," stated Spector.

One of the biggest issues of the original game, the camera, has been a prime focus of his studio, Junction Point.

According to Spector, "We've had a team working on the camera from literally the day we finished the first game. They'll be working on it until the day we ship the second game. (There have been) over 1000 specific changes made to the camera. Our goal is that you will not have to touch the manual camera controls even once to play through the main story path of this game."

As for the actual plot, Epic Mickey 2 has Mickey returning to Wasteland, a dark version of Disneyland and its theme park attractions. While Mickey will return to some locations from the original game, he'll find them wrecked by earthquakes and other natural disasters.

He will also explore some brand-new areas. "There's always been one part of the (Disney) parks that I've always wanted to get into Wasteland," said Spector. "Frontierland has changed so much since it started. There's so much forgotten history there, so Frontierland is going to get a pretty good exploration this time around, plus some other places that we'll keep secret for now."

The original Epic Mickey was a financial flop. This time, Spector is probably hoping that going multiplatform on the Xbox 360 and PlayStation 3 will boost sales.