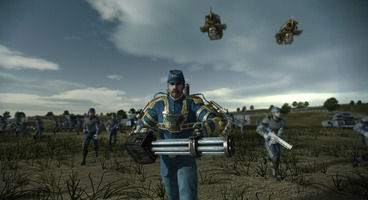 Paradox Interactive has announced that developer Radioactive Software's third person shooter/real-time strategy hybrid, Gettyburg: Armorerd Warfare, will be hitting Steam and other digital distributors on the 27th March for PC.

The game takes place in a strange alternate reality version of the Civil War, where Union and Confederate soldiers are toting massive machine guns, driving tanks and flying zeppelins, all thanks to a time traveler bringing futuristic tech into America in the 1860's.

The game is a real-time strategy game. However, players can jump into any single unit and take control of it in a third-person shooter mode. Union and Confederate troops battle over control points, and wage a war of attrition. The round ends when one side has reached zero attrition points and the other team is victorious.

Radioactive Software is comprised of a one-man team, Danny Green. “Gettysburg: Armored Warfare will bring the fast action of a third-person shooter and the deep strategy experiences of an RTS together in a unique way," Paradox Interactive's senior producer Gordon Van Dyke marveled, "It’s amazing to see the game come together and deliver on the fun factor we were shooting for, and the fact that a one-man team was able to pull that off is nothing short of spectacular.”

Gettysburg: Armored Warfare also includes a persistent XP system with and stat tracking, as well as its own World Editor to allow players to create their own levels. The game will be supporting Steam Achievements and cloud saves as well. 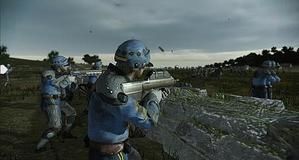