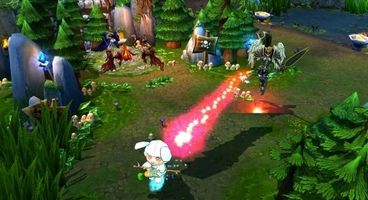 Riot Games has announced that the update that improve League of Legends' co-op mode vs. bots is now live and available to download. The original bots presented no challenge to players, so their AI has been improved to the point of giving players more of a run for their money, according to the developer.

"One of the big things was that we had Ashe as an original bot, but Ashe would use her arrow, which was a skillshot. It wouldn't be at all predicted -- 'there's a point to point target there, I'm going to use the Ashe arrow.' Now they'll actually use predictive targeting," described senior producer Mark Norris.

The new bots will behave more like human players, and won't be tricked by common tactics anymore. According to Norris, players who try to attack a pair of bots will find "one may actually slow (the player) trying to allow the other one to get away. It'll give you a much more realistic look at how you can use your own character."

The game will include a total of 40 bots, each with their own unique personality, and, even more impressively, tactics that are unique with other bots. That is, enemy teams now have thousands of combinations for the various roles of AP or AD and support or tanking depending on who that bot is teamed with. While the bots are still inferior to human players, they will do things like target support and DPS, rather than just mindlessly tanking. In Dominion, bots will coordinate, with one blocking a tower while the other is on the offensive.

Bots still won't jungle, however. "The interesting thing about jungling is that it's not just jungling. It's actually very easy to have a bot go take ogres, then wolves, and so on," Norris explained, adding, "That's actually a huge advanced area that we do want to look at and get into, that we're in the the real rudimentary stages of trying to figure out right now."

That's not to say bots won't jungle in the future, as Riot is planning an Advanced Co-Op Mode vs. AI. Norris teased, "We are looking into what Advanced modes would look like, but there are a lot of questions there. Level 30 is not just level 30 -- level 30 is 2200 ELO, it's 1000 ELO, and what do we really want to be focusing on there? It's difficult to tune this huge range of potential challenge into one Skilled or Advanced mode."

Norris also stated that Riot won't be adding new game modes anytime soon, and that the bot improvements are "literally the next step in the evolution of the ability for designers to use AI in our game. And that will lead to greater advances when we start taking a look at other game modes and things like that."