24 August 2012 | By Jonah A. Falcon
Rovio has announced that the Mars Curiosity rover may have found more than it bargained for on the planet, as a Red Planet update has been announced for Angry Birds Space that adds 20 new levels based on Mars, as well as a new astronaut pig.

In addition, finding three hidden rovers and landers will open special bonus levels where players can discover more about the NASA missions.

Rovio has released a launch trailer commemorating the new update. Check it out in the video below. 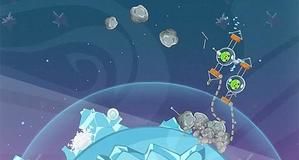