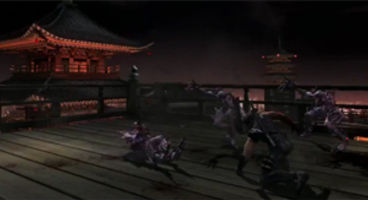 The third dose of DLC for Ninja Gaiden III is coming to Xbox 360 and PS3. It's called the Ultimate Ninja Pack, offering a new higher difficulty "not for the faint of heart," they tease.

There are also new Ninja Trials and other customisation items. They can be had individually or as a compilation. It's available as free DLC for a month, ending May 24th.

"For Ninjas who like to play with friends, The Ultimate Ninja , an all-new shadow rule for the online multiplayer mode Clan Battle is also now available for download as well a higher level cap," it reads.

"Players can download a wide array of new DLC items such as the Ultimate Ninja difficulty, Ninja Trials packs, additional equipment items and a new shadow rule for Clan Battles. Not for the faint of heart, the new Ultimate Ninja difficulty level available for the single player campaign aims to challenge even the most advanced ninjas and is available for free download for a month, starting April 24th and ending on May 24th."

Below is a released trailer for the Ultimate Ninja Pack.