Sword of Justice project on Kickstarter, for 'C&C and Sudden Strike fans' 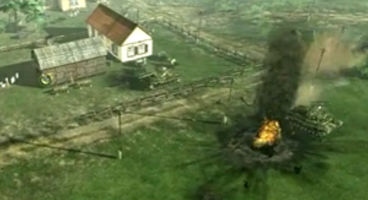 Hungary-based 4Flash, made up of former EIDOS Hungary developers, has announced their Sword of Justice project has reached Kickstarter. It's been in the works for 2 years already.

They'd like it to be out by Christmas, but the RTS game needs at least $195k to achieve that. It's for fans of AI opponents not acting in a "pre-ordained manner" - tactics can beat odds.

4Flash admit there's "still a lot of work to be done" but they hope Sword of Justice could spread to iPad, OsX and Linux. It's set in a post WW2 world. It'll have dynamic difficulty.

"The project was started two years ago and we would like it to be completed it by Christmas this year. For this to be achieved we considered the Kickstarter to be the best solution for you to finance the project," said 4Flash.

Sword of Justice started as a way to bring together former EIDOS Hungary developers. "The aim was nothing less than to rebuild our group through our game. Thus, anybody supporting our project not only helps the completion of the game but reunites and brings into being a new development group," continued their Kickstarter page.

Who does this RTS appeal to among PC gamers?

"It is to those who loved C&C and Sudden Strike; to those who like when AI not to react in a pre-ordained manner; when the gamer with good tactics is able to win even against overwhelming odds; To those who like to upgrade the given units and use them in a manner that takes best advantage of them," described the studio.

"The game presents a post WWII fictive story. The campaign consists of 12 principal fields. Each field is made up of one principal mission and two subsidiary missions. At the end of each field the player receives experience-points and upgrade tokens. There is no pre-determined difficulty level in the game."

If you do well in a field then next time the game will ramp up or down difficulty. "According to plans, two gamers may play a single campaign in cooperative mode. Naturally the level of difficulty also is considerably greater."

There's plenty more information about Sword of Justice on the official Kickstarter page. As of writing there are 17 backers with over $800 pledged and 23 days left to go. Can this RTS reach $195k for a Christmas completion?