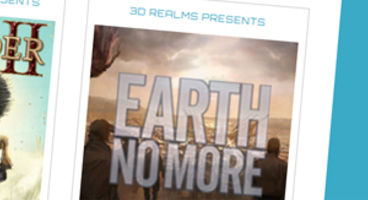 Duke Nukem creator 3D Realms is back and they've got another post-apocalyptic first-person shooter in mind. It's being peddled directly to us, the gamers, through Gambitious - a Kickstarter rival.

Gambitious is all about crowd-sourcing video games, whereas Kickstarter casts a wider net. In Earth No More mankind is threatened with an "environmental apocalypse" as something awakens.

Apparently Earth No More is a co-production between 3D Realms and another unnamed studio. More project details will emerge when Gambitious fully launches.

"Mankind’s relentless destruction of Earth awakens a biological response from deep within the planet’s crust that threatens an environmental apocalypse," reads the official blurb to Earth No More. 3D Realms founder Scott Miller is one of the five Gambitious advisory board members. Earth No More was planned for release in 2009.

Miller is also a chief creative officer at IP management firm Radar Group, which lists Earth No More for Xbox 360, PS3 and PC attached to an unknown developer. Gambitious differs from Kickstarter in that it supports direction donations but also offers the purchase of equity to fund projects. A number of other titles are starting to appear on the start-up.