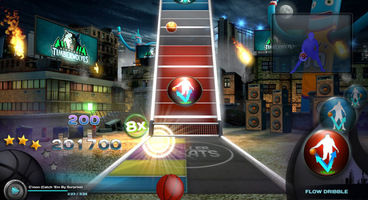 HB Studio's Halifax division will be closing, according to a publisher rep. The studio developed the bizarre new Kinect basketball title NBA Baller Beats, which can best be described as a cross between Dance Central and basketball dribbling clinic.

According to HB's director of operations Melanie Williams in a statement to the press, "HB Studios is closing its satellite studio in Halifax and consolidating at its Lunenburg HQ. The Halifax Studio has been in operation for almost 5 years. With the lease on its Barrington Street location coming to an end, the Company has made a decision to not renew. There are 24 full time development staff at the Halifax Studio; the Company is working to transfer as many as possible to its 15,000 sq ft HQ. The final two projects that the satellite studio worked on – Olympic-based iPhone game Medal Bound and NBA Baller Beats for the Kinect – were co-developments between Lunenburg and Halifax and have been completed. Post launch support for both will be handled in Lunenburg."

NBA Baller Beats publisher Majesco has reassured gamers that HB Studios will continue to support (read as: release song DLC) for the game, and NBA Baller Beats will not miss its September 2012 release.

Strategy Informer got to check out NBA Baller Beats in person at E3 2012, and found that the game was actually pretty fun, and that not only was the game able to use advanced Kinect features to scan the player and the ball in 3D (so it could tell when, say, the ball was dribbled behind the back or between the legs), but that there was very little lag, essentially for the game's purpose.