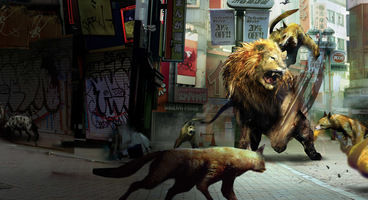 When the concept of Tokyo Jungle was presented to Sony executives by Yohei Kataoka, the reaction was negative.

"It was bad. Initially. It wasn’t received so well at the very beginning,” Kataoka revealed, stating, "I think there weren’t so many people that thought this game would sell just based on the concept, but as the game started to take form there was good user reaction and feedback.”

He even admitted that SCE Worldwide Studio president Shuhei Yoshida, who has become the spokesman for the game, had doubts.

“Initially when Yoshida-san said that he didn’t necessarily have a positive view of the project, he explained there was a catchiness to the concept but the gameplay itself wasn’t at the same level,” Kataoka noted, “So we had to take some time to bring that up to the same level. That’s why it took some time from Tokyo Game Show 2010 for these adjustments to take place.”

When the game gained interest in Europe, Sony decided not to shelve it mid-development. "We had an opportunity to show the videos to Europe and US audiences and the European audience thought it was hilarious," Kataoka said, before adding, "So maybe there is something more similar in the sensibilities of Europeans and the Japanese."

Tokyo Jungle was released yesterday for the PlayStation 3.