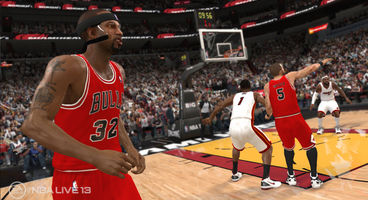 EA Sports has announced that NBA Live 13 has been canceled, due to the game not being good enough to release.

The studio's executive VP Andrew Wilson posted an open letter on the official blog, stating, "We also made a commitment to deliver a high quality experience — this is what our fans expect and what we demand of ourselves at EA SPORTS. But making great games is not easy, and we're just not there yet on NBA LIVE 13. Having continued to look at the game over the past few days, it's clear that we won't be ready in October. And rather than launch midway through the season, we're going to sit out the full year and stay focused on making next year’s game great. This decision puts us on the right track for success well into the future in a rapidly changing industry.

"I'm disappointed that we have not yet met our high expectations with NBA LIVE, but I remain motivated about where we're going. We're committed to delivering new innovation in online, and our progress in the visual presentation of the game continues to take big strides. We also know that a great game starts with great gameplay, and this remains a huge priority for us.

"This wasn't an easy decision, but it's the right one for our fans. I hope you'll agree when you're able to play the game next year."

Fans in the comments section started demanding a roster update for NBA Live 10, when EA Sports oddly censored the word "update"; said fans were not amused.