28 November 2012 | By Jonah A. Falcon
Developer Turn 10 has announced that the upcoming December downloadable content for Forza Horizon, the IGN Car Pack, will include a car with an elaborate Halo skin designed by 343 Industries, as well as an 2008 Aston Martin fit for James Bond. 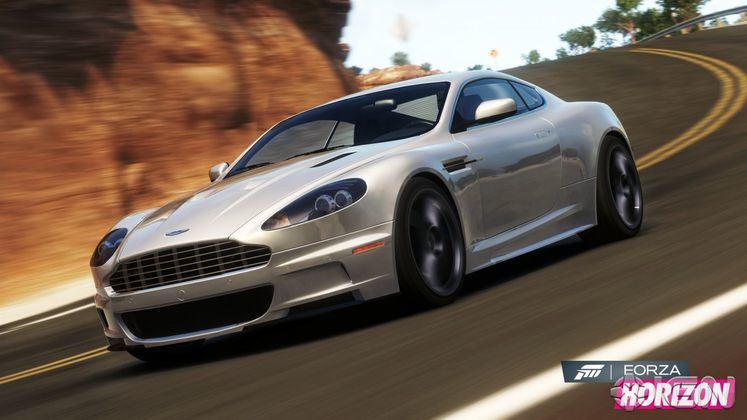 The rides included in the DLC are:

* 2011 Ford F-150 SVT Raptor Halo Edition: Fans of the "Halo" series will appreciate this elaborate skin celebrating one of the most anticipated titles in years. Talented designers at 343 Industries, developers of "Halo 4," crafted this special UNSC-grade livery for the 2011 Ford SVT Raptor, and it will be a welcome addition to any "Forza Horizon" garage.

* 2008 Aston Martin DBS: The Aston Martin DBS and the most famous spy in the world go hand-in-hand. The original DBS made its initial appearance in "Her Majesty's Secret Service" in 1969. The new DBS sports a massaged 510 horsepower V-12, a clean air splitting body kit, and significant lightening. No details have been left unattended – as should be expected from a supercar fit for a superspy.

* 2012 Ferrari F12berlinetta: Ferrari's fastest road car ever can not only defeat a Ferrari Enzo or 599 GTO on the track, it is also a superlative GT car. The 730 horsepower V-12 sounds feral from idle to redline, and its power delivery is ferocious at any RPM, yet it is as behaved and composed as any proper Ferrari tourer. A contradiction? A quick drive shows that the F12berlinetta can do it all.

* 2006 Ford GTX1: Styled after the 1966 Sebring-winning Ford GTX roadster and built specifically for the 2006 SEMA show, the Ford GTX1 offers a functional and versatile top as well as brutal performance. The rear clamshell showcases the nearly 700 horsepower 5.4 liter supercharged V-8, while just behind the engine two buttresses flow dramatically rearward. This rare beast takes the Ford GT to a new level of exclusivity.

* 2006 Hummer H1 Alpha Open Top: So long as practicality is not part of the argument, the Hummer H1 is unquestionably the most dominant and capable off-road vehicle ever created. Demanding attention from any passerby, this unapologetic behemoth can conquer any terrain. Its 300 horsepower and advanced 4x4 system are perfectly suited to tackling anything that dares to stand before it.

* 1993 McLaren F1: Conceived by Gordon Murray to bring Bruce McLaren's dream of a McLaren road car to life, the McLaren F1 exceeded all expectations and set multiple speed records upon release. With its central driver's seat and 6.1 liter, 627 horsepower BMW-built V-12, the F1 is still the fastest naturally aspirated car ever created. Its one million dollar price tag also made it the most expensive car of its time.

* 1971 AMC Javelin-AMX: Capitalizing on Mark Donahue's stunning successes driving a Javelin in the SCCA Trans Am Series, AMC sought to ingrain more performance into their perceived brand identity. With the AMX package and the 401 V8, the Javelin AMX came alive. It was advertised as having 330 horsepower and could achieve mid-14 second quarter mile times. The Javelin AMX is a classic muscle car and one of the last of its kind.

The IGN Car Pack will be released on the 4th December and will cost 400 Microsoft Points.