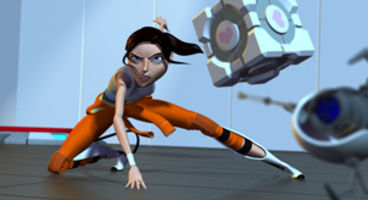 Alex Zemke who has been a part of projects such as Uncharted 2 and 3, Killzone 3 and SOCOM 4 as a graphical artist, is putting together an animated film for Portal entitled 'Companionship'.

It'll feature Chell and at least one Aperture Science cube among its cast. It's a non-profit project and it'll be launching a Kickstarter campaign in about 5 to 6 weeks time for fan funds.

In an update on Zemke's DeviantART blog, he announces he'll be at the Anime Blues Con in Memphis. It's then his Kickstarter drive for pledges will begin.

"At that convention, I'll also be announcing the launch of my Kickstarter.com page to raise funds for it! Chell's rig is getting a makeover from the ground up, being redone by an actual feature film pro, rather than my buddies trying to learn The Setup Machine as they go. She's getting such a tremendous tune-up, and she is gonna be awesome!!!" he said.

"Lithe and limber, like a good Chell should be!"

"So that guy's going to cost money. Also, I shouldn't try to do music and sound effects by myself. It's been well over a decade since my radio production days, and I never had to take on something like this. More money! And matt painting! More money! And if these guys are getting paid, then the animators should damn well get something! More money!"

"I've got a few notions about backer rewards (the incentive gifts that give back to the donors who helped make the film possible), but I'd love to hear ideas from others," continued Zemke. How about some Chell figurines?