30 July 2012 | By Jonah A. Falcon
Indie developer DrinkBox Studios has announced that their PlayStation Vita puzzle platformer Tales from space: Mutant Blobs Attack will be landing on Steam on the 15th August. The game will include the usual Steam features such as Steam Achievements, Steam Cloud Saves and Steam Leaderboards.

The game will support both gamepads and keyboard and mouse. Unique to the PC version are special minigame levels, as well as HD resolution, as well "more hidden references and bad jokes."

According to DrinkBox Studios co-founder Ryan MacLean, "Even with these upgrades, the Blob remains hungry and disgruntled." 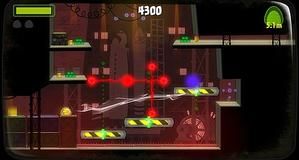