Three devs at Valve "can ship anything," though it really takes just one 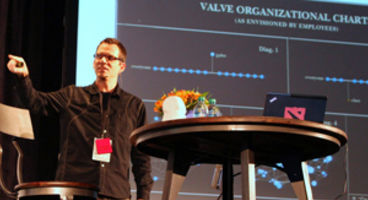 He admits that "one person can ship anything", but the "work gets better if you just check with a couple of people" before setting it loose. Valve places tons of "courage and trust" in their staff.

Employees at the studio don't follow a schedule from higher ups but plan out their own ideas and projects, said Greg Coomer. Last year Valve's employee handbook leaked.

"Three people at the company can ship anything. And the reason it is three people – because really it is one person can ship anything – but the work gets better if you just check with a couple of people before you decide to push a button," Greg Coomer told Geekwire. No one assumes the role of a traditional 'boss' at the developer.

"If we are going to hire these incredible people,” he continued, “and we are not going to put constraints on them, then we can’t be afraid to let them actually take charge and ship. That takes a lot of courage and trust.”

"There are attributes that other companies have quoted about themselves," added Coomer, that they allow their staff "to spend some fraction of their time actually deciding on their own what to work on, but at Valve that percentage of your time is 100 percent. Every single person is responsible for deciding what they do every day.”

"That can be pretty daunting,” he admitted, “Everyone is constantly making big decisions for the company, and deciding where we’ll go and what products we should build and so forth. It can feel like an exercise and an experiment in cooperative leadership.” There must have been some very troubled night’s sleep when the announcement of Left 4 Dead 2 stirred such a furore from fans of the original. It would also explain away all those missed deadlines.