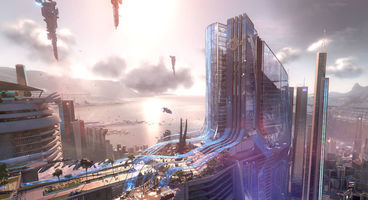 The upcoming Killzone title is going with a colon'ed subtitle Shadow Fall rather than a 4. According to Guerrilla Games managing director Herman Hulst, it's due to it being on the next-gen PlayStation 4.

According to Hulst in an interview, "I think for context I like 1, 2 and 3, personally, but with Shadow Fall, it's a new platform. It is, in a way, a new start for the franchise with the new look and the new style of player character. I think the name now, as a Shadow Marshall operating in these shadows that are cast by this wall that's separating the two factions... it just felt right to call it that."

will be taking place 30 years after the third game, with Vektans and Helghans living together in Vekta City, where these is understandable tension between the two hostile factions. This will open up story possibilities, as technical director Michiel Van Der Leeuw noted.

"It looks different, our take on how we wanted to progress the franchise going into PS4 and also the player's character. You're now playing as a Shadow Marshall, part soldier, part spy. We wanted to really set the player up to now take on the powerful enemy properly," he stated.