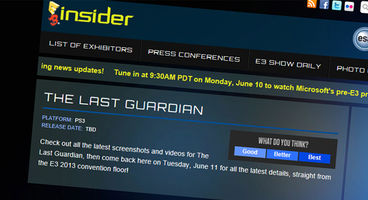 A few gamer hearts were sent a fluttering, but Sony has put a stop to that. The ESA site for E3 2013 suddenly counted The Last Guardian among titles due for a showing next week. Sony burst those hopes.

It seems it may have been an administrative mishap that landed The Last Guardian on E3's site. The Sony Japan title failed to appear at last year's E3 or Gamescom.

The Entertainment Software Association's E3 Insider was the 'speculative blabbermouth' behind it all, which also mentions Grand Theft Auto V for PC.

"The page on the ESA site is speculative I'm afraid," a Sony spokesperson told Eurogamer. Plenty of rumours have swirled around the long absent title, and if it fails to materialise next week then even will get added no doubt. There's been little to no mention of it for quite some time.