Sunless Sea about "exploration, survival and loneliness" on Victorian steamship 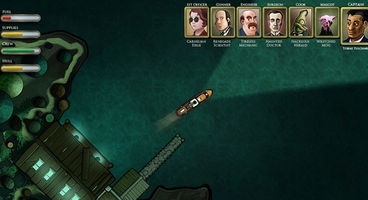 Based on Fallen London's Victorian Gothic universe, Sunless Sea casts us adrift the big blue as we look to navigate uncharted waters in a top-down voyage. Influences include FTL and Sid Meier's Pirates!

We choose our ship, our captain and then set sail into the "lightless depths of the Unterzee." Areas are procedurally generated, and we'll need to keep our crew sane.

Right now Sunless Sea is on Kickstarter having just begun its campaign with 28 days left. UK-based Failbetter Games are asking for £60k and so far they've got just over £24k.

"Choose your ship, name your captain, and leave the bustle of the docks for the wild and lightless depths of the Unterzee. Some areas, like Fallen London itself, are fixed and will always appear where you expect them. But once you get beyond the trade lanes, the Sunless Sea is unexplored, and the map will change every time you play."

"One time you might encounter a corsair's village in a forest of stalagmites, another you might come face to face with the vicious war trimarans of the New Khanate or the golden agents of the Dawn Machine."

"Explore and survive. Grow strong and wise and rich and feared. With luck and skill you may achieve an endgame goal: find your father's legacy, found a pirate princedom or sail beyond the Unterzee into the strangeness at time's heart."

Check out the Sunless Sea Kickstarter for more on this curious game, and it's weird universe of a 'stolen London'. Failbetter Games plan for release on PC and Mac in Q2 2014, with a Beta expected in March.