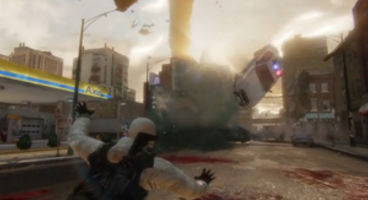 Spandex-wearing avatars for justice unite! A little video game project called Hero from Midway Chicago never saw the light of day except in a few video clips that managed to escape.

Now, Phosphor Games Studio is reviving the premise with Project Awakened on Kickstarter, as the former Midway developers ask for $500,000 in pledges. They're already at $42k.

The key to the game is the "modular powers and skill system" that lets us create very unique characters (comical or serious) in a world that completely reacts to us.

The studio will be using Epic's latest Unreal Engine 4 technology, according to their Kickstarter campaign blurb.

"For the first time in a modern AAA action game, you will have the opportunity to completely define your dream videogame character, from abilities to aesthetics, all while playing in an action-packed world that responds to your personal playstyle," describes the studio. Prototypes of the game are using Unreal Engine 3.

"Project Awakened contains a modular powers and skill system that allows players to select from a huge number of abilities and combine them in unique ways. Unlike other games which use a class system or skill trees, Project Awakened leaves every choice and ability up the player."

"Likewise, players will have the opportunity to completely customize the appearance of their characters. Comical or serious, rough or polished, nearly any character imaginable can be created using the Project Awakened Player Creation system. The result is a game with seemingly limitless gameplay and replay potential based on which abilities players choose," added Phosphor Games.

• Create the video game character of your dreams

• Play how you want in an immersive story

• A game world that responds to your every move

• Scores of abilities and weapons that modify each other

With 29 days left to go Project Awakened has already amassed just over $42,500 in pledges from about 900 backers. Check out the Kickstarter campaign for more information. A closed beta is planned for August 2014.