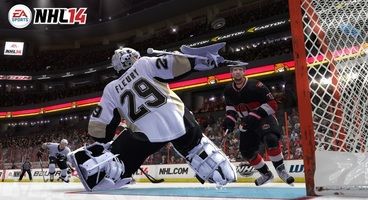 EA Sports has made some widespread improvements in NHL 14, and in a new developer diary, gameplay producer Ben Ross goes into what went into the goalies.

Foremost, goalies now have improved artificial intelligence, such as staying out and challenging on shots rather than pulling the puck back in with them, and they will now stay in a save/position if they are aware they are going to be hit by the puck that is on its way. They realistically react to shot fakes as well.

They also removed "Spider-Man" goalies who could defy momentum and gravity to make saves. On the other hand, they won't be locked in butterfly on dekes, and will consider forehand shots more dangerous. Their field of vision have been made more realistic, making screens far more difficult to see through. Finally, they will be more situationally aware on 2 on 1's, low shots, and especially one-timers.

Check out the developer diary in the video below. NHL 14 will be released on Xbox 360 and PlayStation 3 on the 10th September 2013.