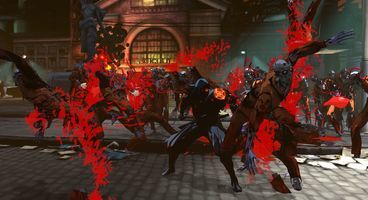 Tecmo Koei has announced that their ninja-meets-zombie action adventure Yaiba: Ninja Gaiden Z will be coming in early 2014, and in addition to Xbox 360 and PlayStation 3, it will also be hitting Steam.

The game was announced over a year ago, as Team Ninja's Yosuke Hayashi and comcept’s Keiji Inafune have put players in the middle of a zombie apocalypse as a cyborg ninja named Yaiba.

Yaiba: Ninja Gaiden Z adopts "a stylised, living comic book" art style, as players slaughter zombies using Yaiba's sword and weapons integrated into his bionic arm. The game goes over the top in cartoon violence as the developers ask, "Will he kill by turning his cyborg arm into a razor chainsaw for slicing up undead—or just rip off an opponent’s arms to use as zombie nun-chucks?" Apparently, both options make Yaiba's heart laugh with twisted passion.