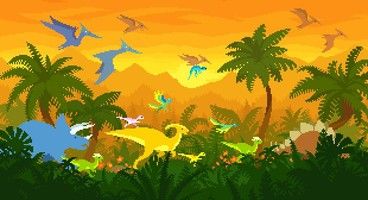 Indie developer Pixeljam has announced that the sequel to their 2D dino racer is now on Kickstarter. Dino Run 2 is seeking $175K, will be released on PC, Mac OS and mobile.

Dino Run 2 will be adding new dino types, as the developer noted, "Our classic Velociraptor is back with his speed and reflexes, while the Archaeopteryx can glide through the air and dive bomb enemies. The Parasaurolophus is fast and heavy but too tall to enter most tunnels, while the mighty Triceratops is unstoppable at top speed, smashing through everything in his way."

These racing dinosaurs (and other prehistoric creatures that aren't dinosaurs like the Archaeopteryx) will race through their native Cretaceous Era, the early human Paleolithic Era, and the Modern Era of course, running through the streets of the city and suburbs.

The game will also feature procedural physics, so players might, for example, domino stone pillars which scare small birds who get eaten by pterodactyls as they flee.