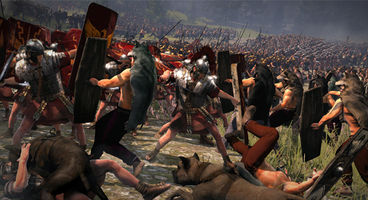 Creative Assembly are tweaking Total War: Rome II to be in full support of SteamOS when it releases, and that includes compatibility with their Steam Controller which they were invited to try out.

The studio has always wanted the series to be "enjoyed by living room gamers," and now it can thanks to SteamOS. It grants them the "control fidelity and platform" to do so.

The whole family can be subjected to your tactical brilliance as you level Carthage with Roman legions. In-house streaming can use your PC rig to power your empire.

Rome II launches on Linux early next year, and that comes with "full Steam Controller and Big Picture support to be added as soon as Valve gets us a controller dev kit,” reveals brand manager Rob Bartholomew.

“At Creative Assembly we want our customers to be able to play on as many platforms and in as many locations as possible, so today we are announcing future support for both SteamOS and the Steam Controller," he said.

“We’ve always wanted the Total War franchise to be enjoyed by living room gamers, but the limitations of traditional hardware made our style of game play impossible. Last month, when Valve invited us to test out the new Steam Controller and unveiled their plans for SteamOS – we were impressed."

"We believe it will provide us with the control fidelity and platform we need to make a living room experience for Rome II that could be a more compelling experience than playing with keyboard and mouse."

Valve has teased there will be multiple support announcements for SteamOS from numerous triple-A titles.