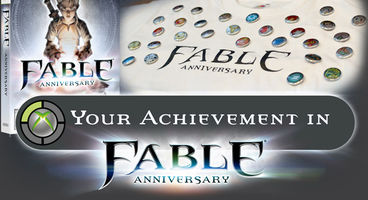 Lionhead Studios is calling all Fable fans to remember their chicken chaser days in Albion and submit their ideas for achievements. They'll be whittled down to five ideas with fans left to vote their favourite.

The winner will get a free copy of Fable: Anniversary at launch, their name in the credits and the honour of their achievement's immortality. Entries must be in by July 14th.

Simply suggest an Achievement name, description and optionally a suggested logo for it. Finalists get a T-shirt and some E3 badges. What will the fans think up?

"As pleased as we are with the achievements we’ve already thought up, there still remains one final achievement which we’re yet to come up with. And that, dear Chicken Chaser, is where you come in…" tease Lionhead.

"We’ll be handing the creative baton to our community by asking YOU to dream up the most creative, challenging, fun and unique achievements possible. Once we’ve got your ideas, we’ll sit down and shortlist our favourite 5 and, once again, hand the wand of decision making (previously known as the creative baton) back to you by asking you to vote for your favourite achievement." The public voting begins the week of July 15th.

To enter into the competition visit the official Lionhead website. Fable: Anniversary releases on Xbox 360 later in 2013 and is a HD re-mastered version of Fable: The Lost Chapters, with no mention of a PC release (Boo! Hiss!).