10 July 2013 | By Jonah A. Falcon
Reef Entertainment has revealed the first gameplay trailer for their licensed adaptation Rambo: The Video Game, as John Rambo returns to the Vietnamese jungle, this time with what appears to be a fabulous hairdo.

Check out the gameplay trailer in the video below. Rambo: The Video Game is due to be released on PC, Xbox 360 and PlayStation 3 in August 2013. 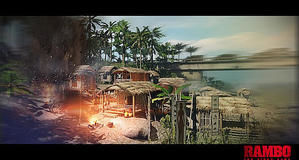