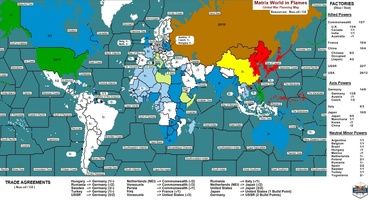 According to the studio, "The v1.0.5 Update fixes a serious issue with restoring saved games that were made during the DOW sub-phase Setting Up Reserve Units, a problem with Breaking Down units where some divisions were shown as possible choices even though their combat factors were too high and fixes a critical issue with Production when using Unlimited Breakdown and there were units in the Breakdown Pool that had to be reformed."

Other fixes by the patch include gameplay tweaks and glitch removal, such as modifying the range of a naval unit which is starting its move from a port so that it doesn't exceed its movement points.

Players can download the patch directly from Strategy Informer here.

• Added more information to the error message when the program is unable to access the Seeking Opponent database. This helps identify the underlying problem.

• Fixed a problem in the reinforcement phase where if a carrier air unit were loaded onto a carrier and then repositioned elsewhere, it was not removed from the first carrier and ended up appearing in multiple locations.

• Added code to restrict the placement of new factories on the map to home countries.

• Removed conditional clauses that may have left a flag mistakenly set so the message “Please wait, updating Units in Hex panel.” would appear and never go away. This problem effectively halted play.

• Fixed a typo in the code that was causing a fatal error when using 3 monitors.

• Modified the code so if a player picks up land units during the land movement phase (or advance after combat sub-phase) and then places the units back in their starting hex, the effect is the same as if he had pressed the ESC key, canceling the move. Previously, out of supply units were being disorganized under these conditions, which wasn’t correct.

• Fixed a problem with Breaking Down units where some divisions were shown as possible choices even though their combat factors were too high. For example, a 2-4 infantry division was shown as possible for a 4-3 infantry corps. In that case the second division would have had to have had zero combat factors. This error could cause a lot of trouble later, such as a German division appearing when a USSR corps was broken down.

• Fixed a fatal problem with restoring saved games that were made during the DOW sub-phase Setting Up Reserve Units.

• Added another check for available oil before creating the Use Oil form. When no oil was available, it was possible that a non-fatal error would occur.

• Added a check to avoid a rare fatal error when shutting down the game.

• Added yet another check to avoid a fatal error when terminating a game.

• Modified a check for air units when counting the number of pilots that should be placed in the reserve pool after setting up a major power. Previously this had been generating a fatal error in some rare cases.

• Added another check to avoid a fatal error when creating a new game from within an existing game.

• Changed the Production planning form to help clarify the oil needed to reorganize units. The summary panel’s “To Reorg. Units” entry now shows two numbers separated by a slash. The first does not include any units at sea that can stay at sea. That means if the unit has to return to base it is included in the sum (assuming it is disorganized). The second includes all units (including those currently with sentry status). Sentry status is not something that is shown to the other player in a NetPlay game; it’s a very small Fog of War item. But that's why the second number includes all units at sea.

• Added a PDF and JPG files for the 2D10 Land Combat Results Table to the Manuals folder for MWIF. Also included are 3 PDFs of the cover art for the manuals. These are provided in case someone wants to print them out.

World in Flames was released on PC on the 7th November 2013.