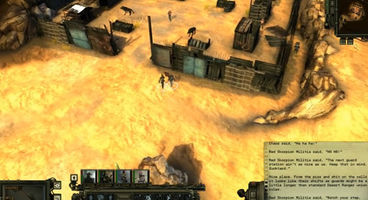 It's here! inXile Entertainment has set loose the radioactive dogs of war as the long anticipated beta for Wasteland 2 is now available to backers. The beta is PC only for now with Mac and Linux in the works.

Steam keys are retrieved from backers' Ranger Center account, and inXile plan to release Wasteland 2 on Steam Early Access after backers have had "first crack at it."

The beta build is far from the complete game as the entire Los Angeles section of the RPG is kept out of this early test build, with only sections of Arizona offered.

"Creating a deep RPG is a unique challenge, in that so many elements need to be working well together, with 95% of the game's underpinnings complete before beta can begin, which is what we've all been working so hard on this last month. Now, however, is the stage of development where the magic happens," posted inXile.

"With most of the mechanical issues behind us, now we can really start digging deep into the game and finding ways of taking it from good to great. No amount of prepping and planning can replace old-fashioned hands-on playing, testing and iteration time, which is why we are so grateful to have you, our backers, help us hone this process like never before. So thanks once again to all of you for giving us this opportunity to make your game in this new and open way. Your input has been, and will continue to be, critical every step of the way, and Wasteland 2 will be better because of it."

They continued: "All the game's major systems are now implemented, which allows us to expedite the amount of depth, fun and subtlety that gets in, but this is an ambitious game both in terms of scale and the amount of reactivity we have planned, so please don’t forget that we are not complete, and that there are still a host of issues that need to be addressed. I’d like to highlight some of these so you know what you’re playing and how the final game will compare."

There are still elements no implemented like certain Ranger skills where you could have found them useful, warns the studio. The beta is also initially only for PC with Mac and Linux versions being looked into.

Check out the latest Wasteland 2 update for more information on the beta.

"We’ve all been pouring our heart and soul into Wasteland 2, and I hope it shows. I’ll never forget the elation from those first two days of our Kickstarter campaign and how happy I was to get this chance. Now, after the long journey, I am filled with excitement and nervousness," said Brian Fargo.

Log into the Ranger Center to receive your beta key.