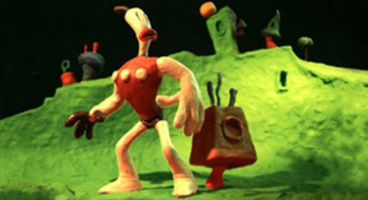 Pow! You're back in 1996. Doug TenNapel, creator of The Neverhood, has announced he is working on an all-new claymation adventure. It's not a Neverhood sequel as EA holds the rights to the IP.

TenNapel also created Earthworm Jim. He said EA is "not being bad" protecting what's theirs and that it's "much easier (and frankly, funner)" to start fresh. The old clay gang is getting together.

EA landed rights to the intellectual property when TenNapel sold it to publisher Dreamworks Interactive, who was snapped up by EA in 2000; there's no animosity.

"Through the years Neverhood fans have asked for another game, and I'm partnering with my EWJ and Neverhood buddies Mike Dietz and Ed Schofield to make a full sized, PC and Mac point and click adventure game in clay and puppet animation. New characters, but in my usual style," posted Doug TenNapel on Facebook.

"Terry Taylor is doing the music. Here's where you come in. What would you, the Neverhood fans, want to see in a new game? We'll read every suggestion and actually try to make all of the good ideas happen!"

He explains in a bit more detail why he and his original Neverhood creators can't return to the IP:

"I've explained this before, but I'll be very thorough now. Intellectual Property rights are no different than you owning and controlling your couch. Once you buy it, I can't come into your house and take a picture of it, then sell that picture to make money. You own it. So back in the day, we needed one point something million dollars to make the first Neverhood game, and publishers would pay you the money, but you HAD TO assign the character rights to the company."

"I did that with Earthworm Jim and Neverhood, so I own and control neither one of those characters or worlds. It was the price of admission to getting to do a game," he continued.

"They never fully understood the fanbase for the game, but that's not my problem."

"I want to note that EA is not being bad in protecting their property, and they have no obligation to make an iPhone port or to let me use the character... I sold them the couch after all when I assigned the character rights to Dreamworks Interactive. If it was up to me, I'd make 800 Neverhood sequels the same way that I would make 800 new Earthworm Jim games. It's not my decision, and it's not my place. It's MUCH easier (and frankly, funner) to create something new!"

Doug TenNapel and his development team want fan feedback right now so check out his Facebook.