14 November 2013 | By Jonah A. Falcon
UK indie studio We Are Rising Interactive has launched its 2.5D arcade dragon shooter Skies of Fire on Kickstarter. The game puts the player in the role of a dragonrider bombarding enemies while avoiding retaliation.

The player will find themselves dealing with enemies of various strength, including archers, catapults and even other dragonriders. The arsenal of weaponry the player has at their disposal include poisonous and fire attacks, which can also be employed against them as well.

Making getting close to the ground tempting are the "souls" that enemies drop, which are valuable and tradeable with merchants to purchase stat upgrades and ammo.

Skies of Fire includes a 20 level campaign Mode, a Survival Mode, various minigames and a mission editor which allows the player to "choose from any of the campaign maps, set how many waves there’ll be, select number of enemies per wave, select which specific enemies you want to fight against" and so on.

WAR Interactive is looking to raise £6,000; gamers interested in backing Skies of Fire can do so here. 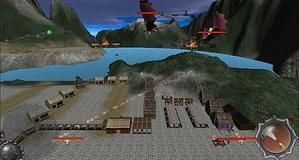