Maxis begins turning attention to "improving the simulation" in SimCity 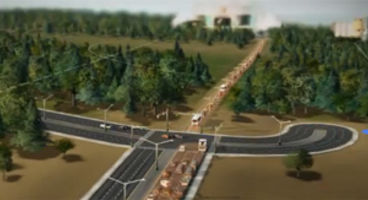 Stone Librande, lead designer for SimCity, has blogged that the studio is near to resolving the server woes for the game and so they have begun looking into all the player feedback relating to the simulation.

The team is working on "additional fixes with the pathing" of the agent system, which right now is heavily flawed and causing mass gridlock. They're also "slowly re-enabling" non-essential features.

Outside of the obvious trouble with servers, the GlassBox engine is causing trouble with its current method of dealing with Sims going about their day.

SimCity lead scripter Guillaume Pierre is currently going over the code for this agent system and has already posted a video showing huge improvements to Sims out and about on the road. Currently they'll try to get to where they want to go via the shortest possible route, but by no means the quickest. Congestion isn't taken into consideration.

Thankfully this latest footage shows that the Sims might have a brain cell or two after all as they'll switch route if congestion is bad and an alternative is available.

"SimCity is built on GlassBox, which is an agent-based simulation engine. At the surface level, GlassBox is designed around the premise that “Agents” are created to carry data to various “Sinks” around the city. In SimCity, you can think of the “Agents” as Sims and vehicles," blogged Stone Librande.

"The “Sinks” are the buildings that receive money, happiness and other resources from these Agents. During development we tested many cities in a variety of scenarios, but there are almost limitless permutations. Now that the game is in your hands we are seeing the emergence of many cities that test our systems in unique ways."

"Our main focus right now is updating the pathing system that the Agents use to get to their Sinks. Running a successful city means keeping the traffic flowing and we are actively working to make this system better," he continued.

The solution is apparently adding 'weight' to a road meaning that when it becomes too heavy then it will also lose appeal among 'Agents' who will then pick lighter routes. There's great news for emergency services as well.

"We are working on additional fixes with the pathing of our Agents and these changes will streamline the way that the simulation unfolds in your city," added Librande. "For instance, emergency vehicles will not get blocked in their garages and will move into empty lanes to get around traffic jams."

"We’re also working on preventing service vehicles from clumping up (for instance, only one fire truck will respond to a fire instead of two) and improving the way that Public Transportation operates in the city. We are currently testing a patch internally and hope to have it out to you soon." Patch out 'clumping' and this is almost a whole new game.

Librande also touched on why Sims don't have set homes or places to work; basically it's to save on a lot more calculations having to run in the background. It's a trade-off for more efficiency within the city.

"We are slowly re-enabling some of the non-essential features that we had turned off during the week of launch. Regional Achievements are live on a select number of servers and we’ve re-enabled Leaderboards on the Test server. We need your help testing the Leaderboards so I encourage you to go to the Test server so that we can expedite the timeframe in which this feature is brought back to the rest of our servers," he added.

For those battling SimCity gridlock the below footage will astound and amaze.