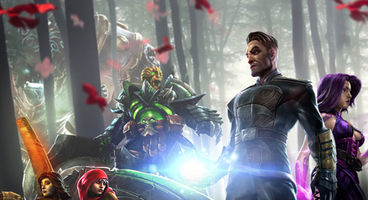 Waystone Games, a splinter group formed from Visceral Games, has got its first title and it's called Dawngate. It turns out that it's a MOBA, and so will be EA's first dip of the toe into such waters.

It's built from scratch to "look and feel familiar" and so shouldn't freak out MOBA fans. From their wording it seems Dawngate will feature heavy customisation and an 'evolving story'?

This is believed to be the F2P MOBA that Visceral itself was working on. An official site for Dawngate has now launched with beta sign-ups available.

"Dawngate is a new MOBA, built from the ground up to look and feel familiar while offering a whole new way to experience MOBA gameplay," describe Waystone. "Dawngate empowers you to forge the champions you love for the roles you want in a competitive arena, shaped by ever-evolving, community-driven content and story."