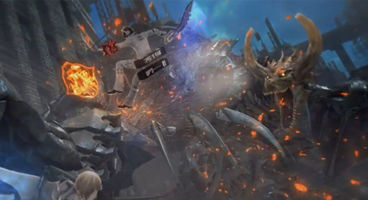 What has SCE's Japan Studio been up to? Well the countdown has finally ended and they've given us a rather curious trailer where everyone appears to be barcoded in a cell-shaded fantasy future.

It's a rather dystopic, albeit pretty to look at view of the world. There's lots of fighting, and monster things as well as totalitarian government forces at work. They didn't mention any platforms.

It's typical 'what the heck am I playing' affair from SCE Japan, and it's intriguing. What shape it'll actual take in terms of gameplay isn't being spilled yet.

We do get a nice shot of Big Ben in the trailer, showcasing just how crazy we Brits are for our CCTV cameras. Wanna see a dragon fight a rocket-firing mech thingy? Of course you do - see the trailer below.