Crytek defends QTE-based combat in Ryse, "designed to be accessible" 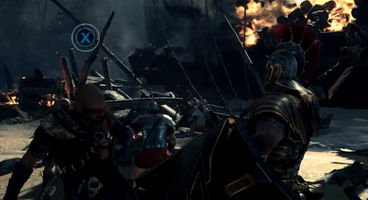 Ryse is Crytek's Roman gorefest where the might of the empire hacks and slashes its enemies into bloodied stumps. There's one issue though - QTEs - and how apparently you can't even fail them.

Well, you can 'fail' the QTE but the kill still happens regardless. Why? Crytek say it's because the combat system is "designed to be accessible to a wide variety" of gamers.

Yes the dreaded word 'accessible' has been used; meaning players are usually hand-held in some way. Crytek's defence of the QTEs comes in response to a Kotaku write-up.

They sampled the E3 2013 wares of Ryse and were left frustrated that the game couldn't frustrate them with failure. Meaning that the QTEs could be ignored and the enemy would still die in a horrific manner. There was no punishment for failing to hit the button prompts. This is by design, says the Crysis creator.

"The combat system in ‘Ryse: Son of Rome’ is designed to be accessible to a wide variety of players and skill levels, but also extremely rewarding to gamers who take the time to learn and truly master it," began Crytek. "While new players will be able to enjoy the game and pull off amazing-looking executions by pressing a basic combination of buttons, the full depth of the combat system can only be achieved by timing the execution prompts correctly, rewarding players with the choice to replenish health, collect gold or earn experience points, and unlocking more spectacular executions that aren’t otherwise accessible. Our E3 demo included eight unique executions – in the final game, there will be around 100."

"On the hardest difficulty mode, button prompts will not appear during execution sequences, so players will have to memorize and carefully read Marius’s body movements to determine which buttons to press and when, adding additional layers of skill and strategy."

"‘Ryse: Son of Rome’ was designed to be a visually breathtaking action-adventure experience, with a non-punitive combat system that’s approachable to more casual players and extremely rewarding to more skilled players. We look forward to showing more of the depth and breadth of the game in the months leading up to launch."

'Non-punitive' combat? That seems a little odd for the blood and gore of Rome's past. Still, they do explain that QTEs are apparently the way to earn XP and other rewards. It's Ryse's equivalent of getting a high string of combo multipliers I suppose, instead of just button bashing quick attack over and over.

Ryse: Son of Rome no longer requires the mandatory use of Kinect and is exclusive to Xbox One.