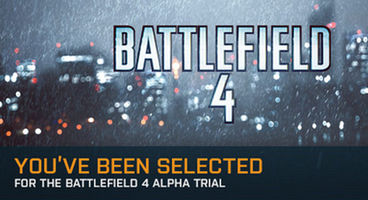 It's stress test time for Battlefield 4 as DICE send out a number of alpha invite emails to select players. The purpose is to put their server infrastructure through the wringer, and not to test gameplay exactly.

In fact a lot of texture will be pure white, except for soldiers and vehicles. DICE also warn alpha testers of "potentially choppy" frame rates. Also expect lag and downtime as routine.

No change there then. Zing! The alpha test will run between 5pm and 11pm BST every night for two weeks. Again this is to test a number of server-related mechanics.

"This is a highly tech-focused, white-boxed Alpha Trial that does not represent final quality of the game," read the alpha invite email. "Most of the level textures will be white (except soldiers and vehicles) and performance at this early stage will be potentially choppy, with possible issues such as server lag and downtime."

This alpha 4 has already exposed vehicle customisation, courtesy of screenshot leakers. Those invite will see an alpha trail of Battlefield 4 appear in their Origin games library. It releases October 29th in the US, November 1st in EU.