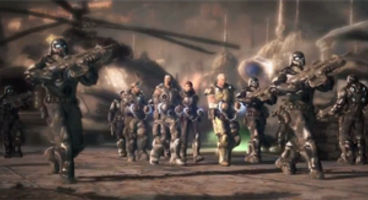 Trouble for Epic Games as Gears of War: Judgment has appeared online via piracy sources a month ahead of its official release. Microsoft has said they're "working closely" with law enforcement where they can.

The platform holder will be pursing their own "enforcement action" if they detect illegal copies being played over Xbox Live, such as "account and console bans." Judgment is a prequel to the trilogy.

The official date for Gears of War: Judgement to be in the shops is March 22nd. Microsoft threatened similar 'vigorous action' against Halo 4 piracy when it leaked.

"We are aware of isolated cases in which Gears of War: Judgment content has been propped on the web and are working closely with our security teams and law enforcement to address the situation immediately," said a Microsoft statement. "Consumers should be aware that piracy is illegal and we take vigorous action against illegal activity related to our products and services." They're more than aware as pirated copies require modified consoles - it's no accident.

"Playing pirated copies of games, such as Gears of War: Judgment, is a violation of the Xbox Live Terms of Use and will result in enforcement action, such as account and console bans," they continued.

Polish developer People Can Fly are behind Gears of War: Judgment. The studio was bought by Epic Games and given work on the IP after their own shooter - Bulletstorm - failed to inspire much commercial success.