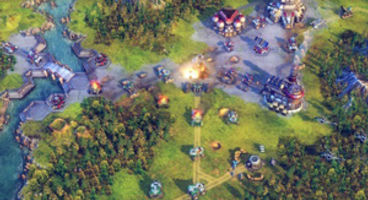 Developer KING Art games has dusted off their turned-based strategy game Battle Worlds: Kronos after having languished in purgatory for so long. A prototype was completed six years ago but no publisher took it.

The studio shelved the series and made the critically acclaimed adventure Book of Unwritten Tales. Now KING Art is ready for Battle Worlds: Kronos to appeal to the masses on Kickstarter.

It has already begun resonating with the Kickstarter horde as just over 300 backers already pledge $15,500 with 39 days left to go. They're asking for $120k in the campaign.

"We’re really excited at the thought of finally putting all the pieces of this game together, after having to stop development on the game some years ago. The time wasn’t right for a resurrection of classic turn-based strategy, but now we believe the world is ready," said Creative Director Jan Theysen.

The huge success of XCOM: Enemy Unknown from Firaxis has certainly put a spring back in the step of turn-based. It turns out they're not for old stuffy WWII battle re-enactments after all, but can be all sexed up with impressive gameplay, visuals and - yes - even story. Now is the time for Battle Worlds: Kronos to strike.

"All of us here have been huge fans of classic turn-based strategies like Panzer Commander, Battle Isle and Advanced Wars since they first came out. Our aim is to recreate the tactical thinking, creativity and overall awesomeness of those titles, in a fresh and modern way. With the backing of fans of the genre I know we can deliver.”

It's delivered in a "classic hexagonal style," with two singleplayer campaigns, challenge maps and "both live and asynchronous multiplayer modes." An exclusive beta will become available for Kickstarter backers.

The plan is for alpha versions to be out in Q2, closed beta in Q3 for all backers, open beta for everyone in later Q3 followed by a release via PC, Mac and browsers in Q4 2013. "As early as one month after the successful close of the Kickstarter campaign you can play your first alpha version of the game - if you backed the project with $75 or more."

Theysen added: "This is a chance for fans to prove the publishers wrong. We think there’s a huge market for this sort of experience – we’re hoping that with the support of the global gaming community we can prove just that and literally kickstart the genre once again.” Answer the rallying call by visiting the Battle Worlds: Kronos Kickstarter.