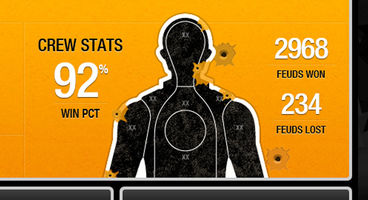 In a Rockstar Newswire post talking about the new Crews system they introduced with Max Payne 3, the studio teases in their opening line that "first info" about GTA V online is due out soon for fans to digest.

They say a whole slew of Crews are "rallying, preparing and raring to go" with some interesting emblems. Rockstar has said that Crews would 'carry over' into GTA V.

When the system first launched for Max Payne 3's multiplayer it was promised that those Crews can survive as they are when other games launch supporting them.

That means you won't need to break up your original Crews or start neglecting them from other titles, which in this case would be Max Payne 3. It's a multi-title guild system.

"We haven't detailed the features of Grand Theft Auto V's online mode as yet (stay tuned for first info soon), but there's already a whole slew of Crews rallying, preparing and raring to go - with some creating some pretty impressive emblems along the way inspired by the artwork and information we've revealed about the game thus far," posted Rockstar.

"In today's edition of the Crew Cut, we take a look at early field of GTAV Crews out there preparing for West Coast domination later this year." By 'West Coast' they of course are referring to Los Santos' fictional position on the West Coast of the US, as it takes after Los Angeles, just like it did in GTA: San Andreas.

Check out the latest Crew Cut update via the Rockstar Newswire for more information. GTA V was recently spotted among German online retailers to be listed for PC, where they also mentioned a 'Special Edition'.